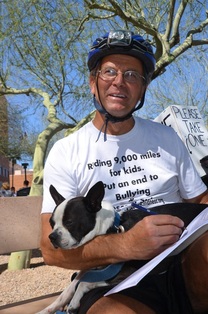 It’s the only bus you would ever hope to be stuck behind during an exhaustive rush hour commute. Its colors are so vibrant and its message so loud that you will probably swear you saw the “Kindness Bus” before hearing it! At first glance, you may even swear that behind the wheel of this happy, mini-school bus is a flower-child who never grew out of their bell bottoms and is touring the country preaching about peace and love. However, upon closer examination you will discover this bus is a powerful vehicle of inspiration changing lives one mile at a time.
The Founder of One Million Acts of Kindness, Bob Votruba is one of the few people whose Greater Purpose is actually a traveling billboard. You can read Votruba’s #GPP on the side of his bus sandwiched near a pink ribbon and the inscribed adage “Everything happens for a reason.” It reads in scrawling painted letters: “One guy Bob and his dog Bogart traveling to campuses across the country to promote kindness.”


“Most of the time kindness isn’t a goal,” said Votruba. “But if you look at it as a goal you start thinking about.. I’m going to be kind all day long. That’s what One Million Acts of Kindness is; an individual lifetime goal for each person. It’s catching on in a very big way, which is so awesome.” You can read about Votruba's latest crusade on his T-Shirt, which reads "Riding 9,000 miles for kids. Put an end to Bullying and Adolescent Suicide." When Bob's not waving at people from inside the bus, he's giving high fives to kids on the streets as he cruises through cities on his bicycle stopping at schools to raise awareness among children and their parents. 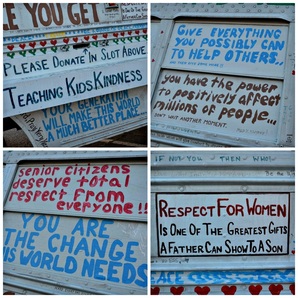 Votruba and his rescue dog, a peppy Boston terrier named Bogart, set out on their kindness expedition four years ago.  During that time the bus has taken on a personality of its own broadcasting powerful messages and words of remembrance added to its exterior by people of all ages, ethnicities and languages. They include “Just be kind,” poignant advice from a 3-year- old. A 94-year-old widower married for 60 years wrote, “Tell your love, you love her every day.” Some of the other phrases include:

“Each and every one of us has the power to positively affect millions of people.”

“Dedicate your life to a charity.”

“Respect for women is the greatest gift a father can show a son.”


While you won't see a house address painted anywhere on the bus; this is where Votruba calls home. Yes, you read that correctly. The kind eyed, middle aged father of three sold his upper middle class house in Ohio and all of his personal belongings six years ago in preparation for his pilgrimage.

"This is  7 by 12, 84 square feet of pure luxury." Votruba jokes. “I lead a very simple life. I had a life of luxury, no matter where you are in life financially it all comes back to who you are and what you can do, what you have inside. That’s what we’re talking  to kids about a lot, you know. They’re away from home at college a lot of times and they’re addressing a lot of issues that they don’t have their core value of friends and family to help them with.  Once you know who you are and what you can do and how you can help people you can change a lot of things.” 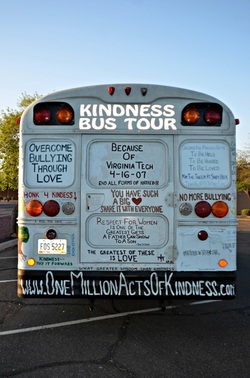 So what possess a father of three with an extremely successful career to sell EVERYTHING to promote kindness? Votruba answers this question by pointing to the inscription on the back of his bus.

Votruba's tour has included trips to  Washington D.C. where he has addressed the National Institute of Mental Health and met with Lynn Rosenthal, White House Advisor on Violence Against Women. By the time The Greater Purpose Project is complete, The Kindness Bus will have made stops in all lower 48 states and many more than once. For more information visit  www.OneMillionActsofKindness.com.